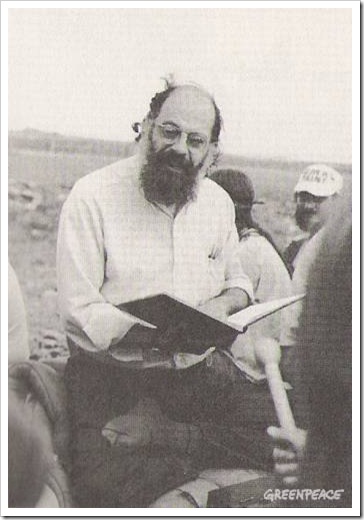 To celebrate the 40th anniversary of Woodstock (Aug. 15 to 18), Treehugger.com has been running a series of articles about the spirit of protest born in the 60s and how it has shaped activism today. I wrote a brief history for them about the role rock musicians have played in Greenpeace activism over the years, starting with the benefit concert by Joni Mitchell and James Taylor that started it all, up to today when Anti-Flag is helping us organize young punk rockers at the Warped Tour.
One thing I didn't touch on in the piece that came up in my research, which I think is really awesome, is that Allen Ginsberg was an "early advisor and mentor" to Greenpeace. I'm a big fan of Ginsberg's poetry, so it made me pretty proud to find this out, and I thought I'd share this picture of Ginsberg reading "Plutonian Ode" at a disarmament rally back in the 70s.
I'd also like to give a little plug to the fantastic book in which I found much of the info for the Treehugger piece as well as both pics you see here on this post. It's by Rex Weyler, a journalist and one of the first Greenpeace activists, and it's called Greenpeace: How a Group of Ecologists, Journalists, and Visionaries Changed the World.

Here's a little taste of the many photos awaiting you on the Treehugger post. This is my personal favorite: Jerry Garcia playing to a sold-out crowd at a Greenpeace benefit concert right here in San Francisco, on Pier 31, in front of the Greenpeace ship James Bay: 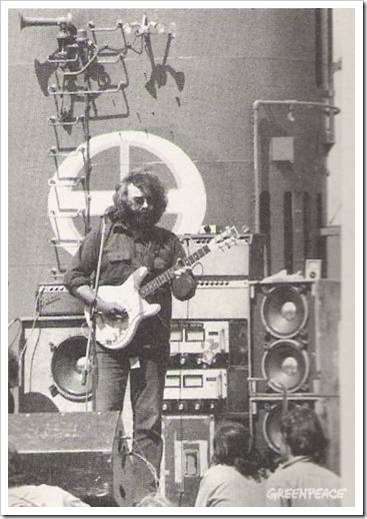 The story of how this benefit concert featuring the Jerry Garcia Band came about and was pulled off in just five days is pretty fascinating. You can get a bit of it from my Treehugger post, but you'll have to pick up Rex Weyler's book to read the whole thing!